Argentina: How will the New Civil & Commercial Code Affect Insurance, and Why Bother with it now?

Argentina recently undertook a bold legislative reform through enactment of statute 26,994. As a result, the Argentine Civil and Commercial Codes –two separate bodies of law which were both sanctioned over one hundred years ago- are to be replaced by just one comprehensive “Civil and Commercial Code”. The desired result is simplification by means of unifying medullar civil and commercial legislation. But this new code not only squeezes existing legal provisions into roughly half the number of sections or articles; it is also ambitiously designed to cover new issues not previously addressed by its two legislative predecessors.

But it will be a long goodbye, as the new “Civil and Commercial Code” (CCC) will not be in effect until 1 January 2016. Even as a group of Argentine congressmen push to move that date closer (1 August 2015 has been proposed), at the very least it would take a good part of next year for the new code to be in effect.

Contracts of insurance have been governed by specific legislation in Argentina for decades, as of when the local Insurance Act was put into effect in 1968 by enactment of statute 17,418. This statute was to replace Title VI of the Argentine Commercial Code, and its 162 articles were incorporated into that legislative body. Hence as part of the old Commercial Code which has now been removed, has Argentina’s Insurance Act suffered the same fate?

Article 5 of statute 26,994 –the law by which the new CCC is enacted- establishes that “The laws that currently integrate, supplement or are incorporated within the Civil Code or the Commercial Code, with exception of that which has been established in article 3 of this statute, will continue to be in force as laws that supplement the Civil and Commercial Code of the Nation…” Article 3 of the statute enumerates specific laws, repealing them as part of the reform. The Insurance Act is not mentioned therein, and thus it has remained untouched by this new legislative initiative. It is also worth mentioning that the other two important insurance laws, statute 20.091 which relates to insurance companies and statute 22.400 referring to insurance brokerage have also gone undisturbed. So no changes here as of yet, but we do have to warn that the local Insurance Regulatory Authority has been anticipating the need for legislative reform and has supposedly been working on a legislative project which will soon see the light of day.

Will the Insurance Business be affected?

The new CCC will take the place of the two previous codes in providing general legislative framework, and hence any influence the new code may have on insurance will be indirect. But there have been some changes to the general rules, and some of these are very likely to affect the risks covered by insurance contracts, or some aspects of the business…

Insurance Professionals Miami is working in partnership with LatAm Insurance Review to provide you with a FREE digital edition, download it here. 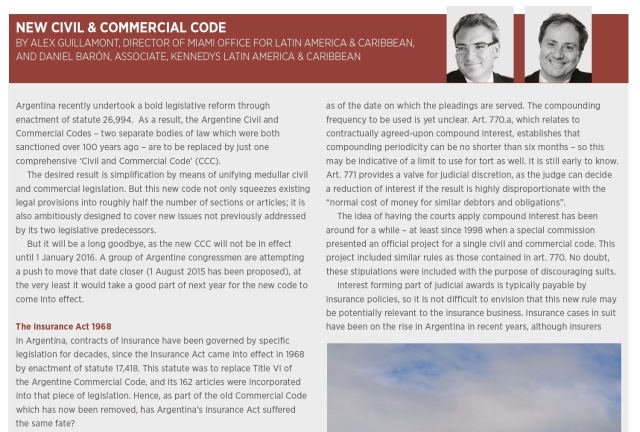 Daniel Barón, qualified as a lawyer in Argentina in 1988, has been working in the insurance industry for about 25 years.  His career started at a top-level international insurance company in Argentina, where he worked for 6 years and became Assistant Claims Manager.  Later, Daniel started his own legal practice specializing in insurance-related matters, where he has accumulated ample experience as a litigating attorney, pre-trial mediation and out of court negotiator for insurers. He has also been frequently consulted on coverage issues. Daniel’s experience relates mainly to GL, Professional Liability, Products Liability and D&O claims. Daniel has worked throughout the Latin American region, including Argentina, Paraguay, Uruguay, Colombia, Mexico and Ecuador. He is now an associate at Kennedys, where he continues his work in the region for insurers and reinsurers.

Alex Guillamont is the director of Kennedys Latin America and leads the Latin American and Caribbean practice at Kennedys. He handles disputes on behalf of leading international insurers and reinsurers, having represented clients across the region. With 15 years of experience, Alex is an acknowledged leading expert on insurance and reinsurance matters regionally. After serving the market with claims in Iberia from our London and Madrid offices, he relocated permanently to Miami in June 2010. The industry has voted him year on year into the LATAMIR Power 50 list, Latin American insurance sector most influential professionals. His team in Miami has been awarded the 2013 and 2014 Reactions Latin America Awards for best Law Firm.

Kennedys’ Latin America and Caribbean office is based in Miami to help international insurers and reinsurers manage claims and non-contentious issues across the region. Our dedicated multilingual team is well placed to support our clients, and we also draw on the skills and experience of Kennedys globally.

The Miami team works with our network of Latin American and Caribbean law firms. Kennedys have associated offices in Brazil, Chile, Colombia, Chile and Mexico and long-standing relationships with leading insurance and reinsurance law firms in the rest of the region.

Our lawyers in Miami are also supported by our international insurance team, including the London Market division and other offices around the world who handle some of the most significant insurance and reinsurance matters worldwide.

After being recognized as the market’s choice in 2013, Kennedys Latin America has once again been voted by industry leaders as Best Latin America (re) insurance law firm for 2014 by Reactions Magazine.