Lack of transparency results in distrust and a sense of insecurity. Improper risk management leaves insureds vulnerable and reduces reliability in the insurance industry. It is hoped that Solvency II-type regulation will tackle this in Latin American countries such as Mexico and Brazil, as is the intention in Europe. In Chile, it has been proved to be the right direction to take in terms of solvency requirements for the insurance industry. 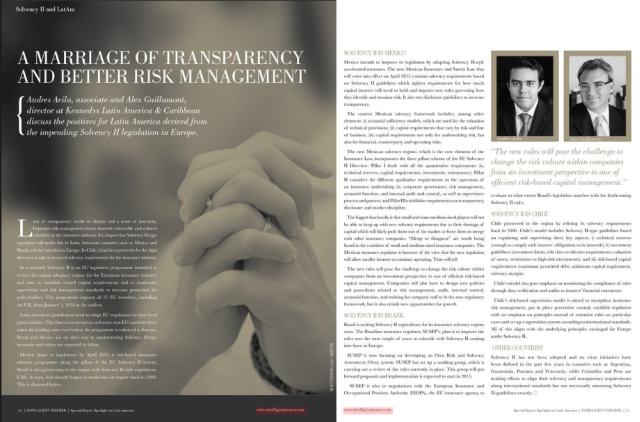 In a nutshell, Solvency II is an EU legislative programme intended to review the capital adequacy regime for the European insurance industry and aims to establish revised capital requirements and to modernise supervision and risk management standards to increase protection for policyholders. This programme impacts all 27 EU members, including the UK, from January 1, 2016 at the earliest.

Latin American jurisdictions tend to adapt EU regulations to their local particularities. This time is no exception and some non-EU countries have taken the leading voice even before the programme is enforced in Europe. Brazil and Mexico are on their way to implementing Solvency II-type measures and others are expected to follow.

Mexico plans to implement by April 2015 a risk-based insurance solvency programme along the pillars of the EU Solvency II system. Brazil is also pioneering in the region with Solvency II-style regulations. Chile, in turn, had already begun to modernise its regime back in 2006. This is discussed below.

Mexico intends to improve its legislation by adopting Solvency II-style accelerated measures. The new Mexican Insurance and Surety Law that will enter into effect on April 2015 contains solvency requirements based on Solvency II guidelines which tighten requirements for how much capital insurers will need to hold and imposes new rules governing how they identify and monitor risk. It also sets disclosure guidelines to increase transparency.

The current Mexican solvency framework includes, among other elements: (i) actuarial sufficiency models, which are used for the valuation of technical provisions; (ii) capital requirements that vary by risk and line of business; (iii) capital requirements not only for underwriting risk, but also for financial, counterparty and operating risks.

The new Mexican solvency regime, which is the core element of the Insurance Law, incorporates the three pillars scheme of the EU Solvency II Directive: Pillar I deals with all the quantitative requirements (ie, technical reserves, capital requirements, investments, reinsurance); Pillar II considers the different qualitative requirements in the operation of an insurance undertaking (ie, corporate governance, risk management, actuarial function, and internal audit and control), as well as supervisory process and powers; and Pillar III establishes requirements on transparency, disclosure and market discipline.

The biggest fear locally is that small and some medium-sized players will not be able to keep up with new solvency requirements due to their shortage of capital which will likely push them out of the market or force them to merge with other insurance companies. “Merge or disappear” are words being heard in the corridors of small and medium-sized insurance companies. The Mexican insurance regulator is however of the view that the new regulation will allow smaller insurers to continue operating. Time will tell.

The new rules will pose the challenge to change the risk culture within companies from an investment perspective to one of efficient risk-based capital management. Companies will also have to design new policies and procedures related to risk management, audit, internal control, actuarial function, and training for company staff to fit the new regulatory framework, but it also entails new opportunities for growth. 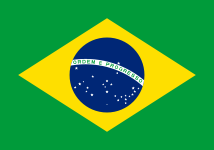 Brazil is seeking Solvency II equivalence for its insurance solvency regime soon. The Brazilian insurance regulator, SUSEP’s, plan is to improve the rules over the next couple of years to coincide with Solvency II coming into force in Europe.

SUSEP is now focusing on developing an Own Risk and Solvency Assessment (Orsa) system. SUSEP has set up a working group, which is carrying out a review of the rules currently in place. This group will put forward proposals and implementation is expected to start in 2015.

SUSEP is also in negotiations with the European Insurance and Occupational Pensions Authority (EIOPA), the EU insurance agency, to evaluate to what extent Brazil’s legislation matches with the forthcoming Solvency II rules.

Chile’s model also puts emphasis on monitoring the compliance of rules through data verification and audits to insurers’ financial statements.

Chile’s risk-based supervision model is aimed to strengthen insurance risk management, put in place preventive control, establish regulation with an emphasis on principles instead of extensive rules on particular cases and set up a supervision system according to international standards. All of this aligns with the underlying principles envisaged for Europe under Solvency II.

Solvency II has not been adopted and no clear initiatives have been defined in the past few years in countries such as Argentina, Guatemala, Panama and Venezuela, while Colombia and Peru are making efforts to align their solvency and transparency requirements along international standards but not necessarily mirroring Solvency II-guidelines exactly.